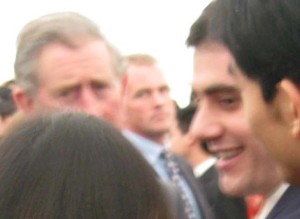 I’m only a little embarrassed to admit how much I’ve enjoyed all the recent royal brouhaha.  At least I’m not alone.  As some British friends seem so desperate to point out, we Americans might be more excited about this frenzy of non-news than His Future Majesty’s eventual subjects.

And yes, the reaction is disproportionate – as is the grumbling backlash.  Still, for a country so enamored of its own origin story, this odd outpouring of American royalism warrants at least some snarky commentary  (“Absolute Tyranny”  – who remembers?  Surely we can put aside a bitter “hiftory of repeated injuries and ufurpations” to snatch up a commemorative mug or two!)

But my mild frustration isn’t a matter of (misplaced) patriotism – I just have no patience for a fair-weather fan.  My interest in the British monarchy started around my tenth birthday, and has persisted even the dry years – when no news of babies, or weddings, or scandals send ripples across the Pond. A Tory-come-lately I’m not.

The following list was written entirely by heart (I promise) and – while skimmable – should establish my credentials:

Two decades ago I could have kept going, through the Georges and the rest of the Edwards, all the way – and perhaps presumptively – to Charles III.  I could have gone backward, too–to Eadred and Eadwig and the various Edmunds, Peaceful, Unready, or Just.

So. How was this information useful?   And what appeal could it possibly hold for a kid in California, so that he spent his free time poring over flashcards and books, memorizing his own, roughshod mnemonics (“Wild William Has Some Red Jello…”), and building Richard the Lionheart’s Norman stronghold from gravel, plywood, and glue?  All fair questions, and I wouldn’t have been able to answer them even then.  This was neither a school assignment nor  – like circular breathing – some misjudged  effort to impress the girls.

Nor did I have any real personal connection to England at that point- just a weak ancestral link on my mom’s side (28% “British Isles”, according to a recent DNA Haplogroup test result). My years in Oxford, Cambridge and London were still years away, as was my single, royal encounter (documented, poorly, in the photo above).  Instead, it was a personal challenge, and the the source of tremendous – if now indefensible – pride.

My self-diagnosis, twenty years later, is this:

A love of history is a love of stories, and I’ve always had a preference for stories that are true.  That all those battles and plots and power struggles actually happened, and involved actual people, gave them a certain legitimacy, and certain kind of thrill.  A person could visit Windsor, or Agincourt, or run around Bosworth Field.  And if these things actually happened in the past, they could conceivably happen again.

And why England? It represented – and still does – a sort of an alternative universe.  We share a language, arguably, and are taught in school of our common history (with “our” being a substantial stretch for a resident of Putatoi / Nueva España/ Alta California / the Bear Flag Republic ).  In fact, it’s the very few and very mild cultural differences (loos, Queens, “pants,” accents)that attract so much American interest – the source of delight for me, an eerie “uncanny valley” effect for others.

And that is why I’ve had so much fun writing Samantha Sutton and the Winter of the Warrior Queen, which will be out later this year.  In the book it’s Jay Sutton, not his niece, who embodies my unbridled, unquestioning fascination with Britain’s line of unelected.  Samantha, for her part, recognizes how the most revered histories can be challenged and destroyed by the archaeological record. But neither Sutton will anticipate the dangerous power these stories still can wield.