Winter of the Warrior Queen: A Soundtrack 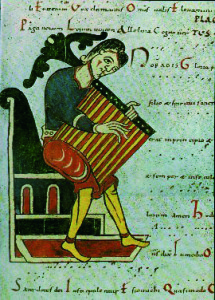 I like listening to music when I write – and have to when I edit.  And while Andres Segovia, Hans Zimmer, Hector Berlioz, and pre-2000’s U2 can accompany most any writing session, there are some times where I need a region-specific playlist to keep my mind on task.

For Labyrinth of Lies, it was Andean folk music, as I’ve written before, and the Nueva Canción movement of the 70’s and 80’s. I’ve only spent a couple of months in Peru in the course of my life, and have only brief exposure to its music, so this playlist amounts to only a very small and likely skewed selection of a rich musical tradition.  But it evoked for me my own experience, and that fit my purposes fine.

For a book set in England, though, where to even begin?  Samantha Sutton and the Winter of the Warrior Queen takes place in the approximate present and deals with the very ancient past, giving me centuries of British music to draw from.  And having lived a total of three years in the UK and the rest of my life in a country that (kinda) shares its language, my exposure has given me lots from which to choose.

What worked, actually, was a little bit of everything.

I relied most heavily on centuries of Anglican choral music -the most English of English music, at least for me.  During my two terms at Oxford as an undergrad and again in Cambridge as a Masters student, I went to church several times a week (!!) for Evensong services.  Hearing that music today puts me again in those hard-backed pews, which – with every groan and creak – emanate centuries of accumulated incense from their cracks and seams.

But there’s more to British music than horns, smooth-voiced soprani, and staid Gregorian hexachords (a truth so plain that just writing it out makes me feel like some fanny-pack wearing, escalator blocking, Tower Bridge-gawking oaf).  Recent British music brings me back, too – to the college bops, society swaps, cheesy nightclubs and fun, frenetic London.

And then there’s the new phenomenon that lands almost squarely in the middle: what I, as a total outsider, have perceived as a revival of a sort of British folk music. It postdates my time in England, and my conscious associations with it relate more closely to my current trans-Bay BART commute than anything else, but it’s certainly served me well.

The following songs*, especially, served as a soundtrack to writing Warrior Queen.  They also  happen to contain some clues!

*Apologies for any ads, and please note that the second song contains some lyrics that verge on the PG-13 (or, in British terms, BBFC 12a):