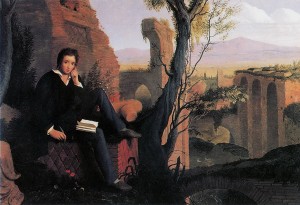 What was it that got me so interested in archaeology as a kid?  It wasn’t just the treasure-hunting aspect (which, I quickly realized, was definitively NOT what archaeology was about).  It wasn’t about the digging in the dirt thing either, though I certainly spent a lot of my free time doing that.

No, my early interest in the discipline was something more fundamental; an emotional draw before it ever was an intellectual one. But what? A way to cope with scary new realizations about death, maybe? About the shared human experience? my role in a very big world? my place in time?

Whatever lay behind my interest was never conscious, and while it’s one thing to try to capture the feeling over the course of a novel or series of novels, blurting out those reasons in an interview, or at a signing, (or in a blog post !) makes them sound so hokey and contrived.

Thank goodness for poetry.  The following works do a much better job in evoking the themes that seized my imagination as a kid, and that continue to haunt me now.

Deals with themes of impermanence, and the equalizing effects of time and death on even the mightiest of mortals.

The Curse of Minerva, by Lord Byron:

The role of history and archaeological sites in the soul of a people, and the great crime of denying a people their past.  (Interestingly, here Byron weighs in on the “Elgin Marbles” [sic.] controversy that still rages today.)

Captures the darkness that underlies all human existence, for all time, no matter how happy or in love we are, or how beautiful we find the world.  Yikes, that’s grim. But it spoke to me in high school for all the usual reasons.

My favorite poem by my favorite poet.   Among other themes, “Brooklyn Ferry” captures the special unity among people who inhabit the same place at different points in time.  It’s a celebration of humanity, and it gets me every time.