Labyrinth of Lies: A Soundtrack 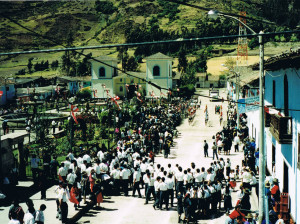 Samantha Sutton and the Labyrinth of Lies came together over a period of several years.  Sections were written, deleted, and resurrected again in my tiny Washington DC studio, in my girlfriend’s (now wife’s) tiny London flat, in our tiny New York City one-bedroom, and in the tiniest of all Parisian chambres de bonne.

Other than the size of my various work areas, though, there were few constants in how the book was written.  I’d write at the kitchen table, on trains, in parks, and occasionally in bed (there was no other option in Paris, where  the futon took up the entire room).

The one fixture was music, which I listened to with headphones, volume low. It was a sound barrier, drowning out the traffic on Shoot-Up Hill, the occasional gunshot from Northeast, or the rowdy gendarmerie across the street. But it also triggered strong memories of that little Andean village — eight, nine, ten years after I’d left it.

80’s and 90’s rock was big in Chavin during my time there, with loudspeakers blasting Eye of the Tiger and I Don’t want to Miss a Thing across the Plaza de Armas from eight or so in the morning.  But the traditional songs of Peru and its neighboring countries still had their place – in shops, at village festivals and, memorably, at a concert put on by the security guards deep in the labyrinth of Chavin.

The following songs, especially, evoke Chavin’s dusty mountain valley and served as a soundtrack to my writing: