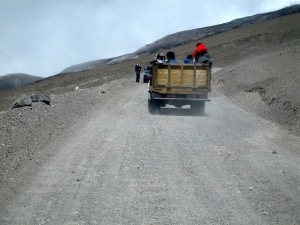 The international papers had predicted trouble: a riot, perhaps, or a coup, or even civil war.

But Lima’s airport seemed empty the morning of my arrival. If the revolution had started, I figured, it was kicking off at the Casa de Pizarro some eight miles away – where, after a contested election and some creative constitutional maneuvering, Peru’s president was being inaugurated for a third (and fateful) time.

Maybe that’s where all the officials had gone. Other than the young woman who stamped my passport, there wasn’t a uniform in sight. The baggage carousel was eerily unguarded, as was the customs area -not that I had anything to declare. At least it made the other Americans easy to spot. Introductions made, we hefted our summer’s worth of belongings and marched out the door together into a very unfamiliar place.

But there wasn’t time to get our bearings. With trouble brewing in the capital, the project director had hired a driver to whisk us straight from sea-level Lima into the Andes’ highest reaches, forgoing the usual overnight stop to acclimate en route. As we sped past stubborn Incan outposts and sunny fields of sugar cane, we did our best to follow the radio reports of the riots breaking out behind us – until we left the lowlands and lost the signal in the canyons of the Cordillera.

And then we all awoke at once in the cool blue of a high-altitude sunset. No one could remember drifting off to sleep, or even feeling drowsy. No se preocupen, chicos, the laughing (and very alert) driver said. At 12,000 feet, we’d just passed out from lack of oxygen.

Now he was urging us out of the van. Some construction equipment had been left scattered on the cliffside road, and he wanted no passengers to distract him as he negotiated the narrow space along the edge.  Bundled, dazed, and breathless outside, we risked glances over the rim and down down down to a crumpled heap of burned out cars. We were away again as darkness fell, achingly alert until the switchbacks straightened and the village lay twinkling ahead.

Travel memories stick. While the details of my first day in Peru are particularly memorable, I can rattle off hour-by-hour accounts of less dramatic arrivals in Agra or Aqaba, Sengiggi or San Salvador.  There’s weird psychology at play – maybe some sort of defense mechanism.    The more unfamiliar a place, perhaps, the more attuned we become to the most minuscule of its details, so we can distinguish what is known and safe from what is new and maybe dangerous.

Readers of “Labyrinth of Lies” might recognize how much of my first day in Peru made it into the book, virtually intact. It’s not easy, and it doesn’t always work, but honing description down to these types of details – the diagnostic – is a crucial aim in my writing. I try – try! – to convey to readers the essence of a place as a lasting first impression.