WordClouds, Part 1 (and a Footnote of Terror) 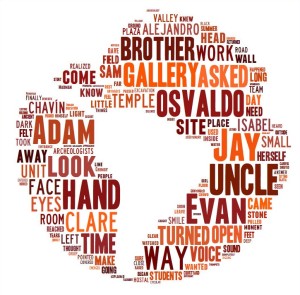 Made with tagxedo, at tagxedo.com

I came across a hilarious post on From the Mixed-Up Files about identifying and eliminating word repetition. I, too, use word clouds to edit, and have found it to be a useful – if slightly unsettling* – experience.

Writing a manuscript in fits and spurts over a period of years – or, say, in the fog of new parenthood – it’s easy to fall back on familiar favorites (or tap into some buried part of the subconscious?*).  But seeing the first draft’s repeats in visual form will always make me cringe. Why does everything have to be “horrible” and “horrific” Samantha’s world?  What’s up with all the “faces” and “eyes?”  How come everyone is “sighing,” “glancing,” and “turning,” all the time?

Even in a finished book, though, some word repetition is unavoidable, and often perfectly fine.  I’m with Stephen King on dialogue tags – I’m not phased by a multitude of invisible “said’s.” “Asked” doesn’t bother me either, if each instance is given room to breathe.

Same goes for archaeological terms, many of which have no good synonyms.  A “screen” has a “lattice” and works like a “sieve,” but can only be a “screen” in the end.    A “trowel” has a “blade,” but isn’t one, and is neither  “spade” nor  “awl”–no matter the thesaurus’ claims.  A “unit” is so much more than a hole.

For the most part, though, I try to keep the repeats to a minimum. Using the same word over and over limits a novel’s range, breaks up its flow, and distracts the reader with echoes.  (But echoes of what, exactly?*)

* A possibly relevant anecdote: In eighth grade, I mounted a voice-activated tape recorder by my bed, hoping to capture whatever I said in my sleep (I knew to expect results; I’d heard reports).  The next morning I was eager to play back the recording, ready with a notebook and pen to transcribe it. But what had been captured was chilling.  It was my own voice, but wasn’t–slightly unfamiliar in timbre, and almost frantic with intensity.

And that was all I could handle.  The third morning I took down the recorder and stashed the notebook away, thoroughly disturbed.  Even writing this now gives me the creeps.